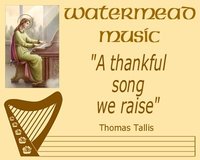 Watermead began as an apostolate to share the original hymns and music being composed in the parish of St Theresa’s, Birstall. The first cassette recording, "Our Songs Give praise", was originally only intended to be used as a demonstration cassette to sell the sheet music for our hymns and mass settings, but its popularity encouraged further recordings. In 1994 we presented this first cassette in person to Pope St John Paul II, when he gave his blessing to the continued mission of our apostolate. Watermead Music was primarily composed for liturgical celebrations, but our instrumental versions have become popular in services of prayer and meditation as well as Holy Hours in a retreat setting.  Music is available as recordings (CDs/downloads) and sheet music (downloads). More information on our apostolate website.

Original Hymns and musical arrangements of popular prayers/liturgies, with instrumental versions suitable for use in service and meditation.

Our recordings are available in MP3 format from various music platforms, as distributed by our music distributors.

Watermead music and hymns are suitable for the celebration of mass and various services of prayer and meditation. PDF versions of our sheet music are currently being uploaded and made available to download.