Categories Devotions Stations of the Cross

Stations of the Cross 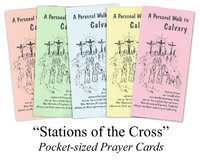 The Stations of the Cross ("Via Crucis"), sometimes referred to as "Way of the Cross" or "Way of Sorrows", is a series of images that depict the symbolic final journey by Jesus on the day of his crucifixion - evolving from imitations of Via Dolorosa in Jerusalem (which is claimed to be the actual path Jesus walked to Mount Calvary). From the end of the 17th century these fourteen images began to be displayed around the walls of Catholic Churches and the devotion developed into what is today - usually the gathered community process around the church, led by someone carrying a cross, and stop at each image (Station) to focus their attention on the pictured scene as the relevant prayer is prayed. Today it is now common to find included a fifteenth image - "The Resurrection".  Everyone has their own way of praying faith devotions and Watermead's first contribution to the 'Stations of the Cross' devotion is a pocket-sized prayer card sharing Tom’s personal prayers as illustrated by David.  Both men were members of the parish Catholic Men’s Society - and the little prayer card is a fine example of Watermead bringing people’s gifts together.